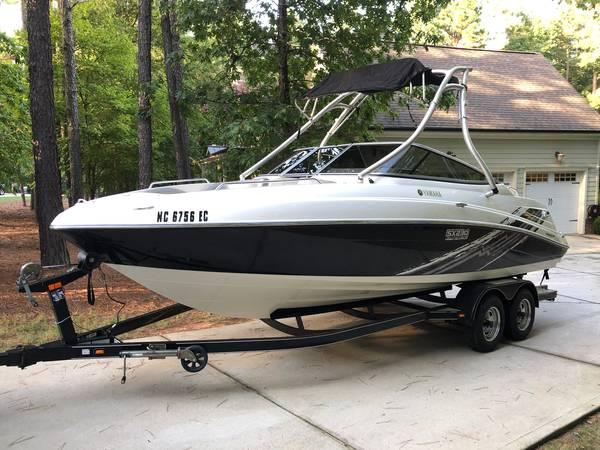 Freshwater only boat! Jet drive safer for kids! Condition: Excellent Hours: 74 Hours Engines: Two 160hp High Output Jet Drive Engines Length: 23â 8â Beam: 8â6â Draft: 16â Seating: 10 Person Includes 2008 MFI Dual Axle Painted Trailer with Disc-Brakes with four new tires. Trailer also has a swing-away tongue. Lots of storage including: Â· 36-quart Ice cooler under front seat Â· Huge ski locker Â· Large transom cabin for storage or porta-potty Â· Plenty of additional under seat storage. Â· Anchor storage compartment with Anchor included Innovative Swim Platform Telescoping Swim ladder Bimini top After market Ski Tower (the SX230 did not come with the tower, AR230 did) Horn (Does not consistently work â common problem) Four New Marine Speakers AM/FM Stereo with swim deck remote control Removable Carpet (like new) Dinette table - mounts in the swim deck or back of the boat Adjustable Tilt Steering Wheel Independent dual engine controls Independent dual wake mode settings Starter battery Gel Battery for accessories Battery Switch Purchased in September 2015 from the owner in Virginia. He had put the majority of the hours on the boat. There is no hour meter, but I have Yamaha tech documentation reports around 55 hours with no engine codes in 2015. In the three years Iâve had it Iâve put on about 10-15 hours max. I have all the service records from the time the prior owner purchased the boat at 15 hours. This has always been a freshwater boat. Prior owner stated this boat has been used in Richmond for all his documented 55 hours. It's first 15 hours from the original owner was used in the Rappahannock River. The owner only used it in the upper James River. Since Iâve owned it, it has only been in Falls Lake (roughly 10 hours). It gets up and out of the water easily without any lag. The top speed is about 50 to 55 depending on how many people are in the boat, and how much has is in the boat. I have had 8-10 people in the boat and have had not issues at all taking off and getting it to plane. It has plenty of power. It is also very maneuverable. Boat can go into 16â water which is nice for the lakes around here. Iâve never had to worry about stumps hitting the propellers. The tower is a $2,000 aftermarket tower that was professionally installed by the prior owner. The AR230 came with a ski tower, this SX model did not for this year. The custom Bimini top is in perfect condition and has been rarely used. It also has a protective zipper cover. I also have the original Bimini top that came with the boat. It is also in perfect condition and has a protective zipper cover. This Bimini top could only be used if the tower is removed. The factory graphic decals on the sides are in excellent condition and show no sign of peeling. There are a few very minor scratches. No dings, dents, or hull damage whatsoever. The boat originally came with one battery. Out of fear that my stereo would drain the battery, I had installed a second gel battery with a battery switch. There is a detachable face CD player with cover. I installed 4 new marine speakers which work great. Stereo includes accessory cord for phones for music playback. Thereâs also a control panel on the back deck where you can control the stereo without having to climb inside the boat. The carpet is in perfect condition. No tears, all snaps are in perfect working condition. I never used it and was barely used by the prior owner. I am meticulous about my belongings and this boat, and I clean it, and flush the engines out every time it is use. The seats are in near perfect condition with no tears in the seats, seams, or anywhere else. Iâve detailed it for this sale. The only known issue is the horn intermittently works. Iâve read this is a common problem. No damage or any other issue. It truly is in perfect condition. It is a great looking boat, and great all around. I hate to sell it, but it isn't getting the use I was hoping, so I just can't justify keeping it.